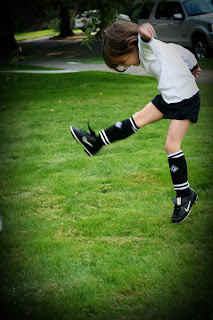 I don't know who has been more excited about Holland playing soccer. Her? or Me? I played soccer in high school, college, and I've also played on a couple of adult leagues. I seriously wish that I had started at a younger age because I really love playing. It's such a great game. We have both been counting down the days and today was the first game day! Holland came walking up the stairs this morning at 6:45 with her soccer ball in her hands. "I'm ready to play soccer now", she exclaimed!

Okay - she wins. She may have been a tad bit more excited because I just wanted a couple more hours of sleep at 6:45! Soccer game or not.

She told me yesterday, "I am excited about a million, Mommy".

Yeah, that's probably more excited than I am!

Anyway, we were having a discussion at breakfast this morning and I was attempting to teach her about sportsmanship. You know - telling her the whole spiel about it's not about winning or losing, it's just about having fun. (as you can imagine, I was fumbling to get those words out because most of you know - I personally believe in my heart that it is ALL about winning!). She ever so nonchalantly said, "I know Mommy. I want the other team to win anyway."

"You do??" I said (trying not to sound accusingly)

"Oh! that's so nice of you, Holland", I said (however, not really believing what I was hearing!) I actually turned to Jonathan and said, "Is she my daughter?!"

A few seconds passed and then she came up with this....

"But, Mommy, I have the super soccer kick so I'm probably gonna win anyway!"

And so she did - or so their whole team did, I should say. They won: double digits to zero! And one of those double digits was scored by Miss super soccer kicker, herself! Go Holland, Go! 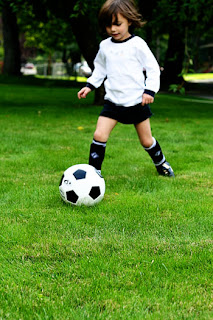 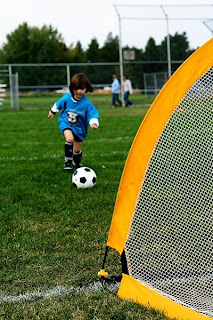 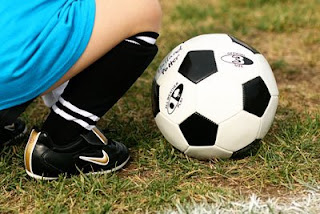 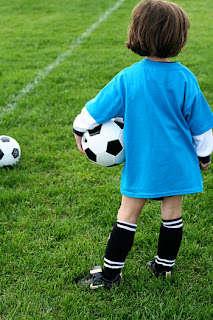 Wow! She's already better than I am! I've never scored a goal in a game!