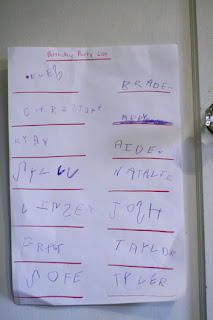 Holland made this birthday party list a few weeks ago, and along with these guests, I allowed her to invite her school friends. She has 14 kids in her class so that was quite a few invites going out. I decided to go ahead and let her invite that many kids, because I thought we would only get about half of them to come. Well, today is the big bash, and we currently have 27 RSVP's! We were still getting them last night. We are having her party at the Spokane Elite Gymnastics facility because we attended a couple of parties there this year and it was a big hit! There are trampolines, trapeze bars, balance beams, high bars, and even a big zip line!

This party goes against everything I have ever said about birthday parties for my kids. I swore I would never have character plates and napkins. Guess who we're having? A combination of Ariel and Spiderman! They're the new Hollywood couple, didn't you know?! I also swore I wouldn't have a party with more kids than I can handle. Well, the 27 RSVP's kinda speak for themselves, however that doesn't even mention all the toddler siblings that will be toddling and crawling around. I think I have counted at least 6 or 7 of them (including her toddler sister)! I have even said I didn't want to do a party at the party facility type places, and well, you see where that got me.

I guess I have always wanted to be the creative domestic mom that has original parties at her house with homemade crafts, baked goods, and fun themed activities (a pirate/princess treasure hunt, a fairy garden tea party, etc.) You know, the types of parties that Martha Stewart must have thrown for her daughter!

I think my problem is that reality is setting in. The party facilities are fast and easy and it takes the pressure off of you. And the bigger the guest list, the more fun the kids have. (theoretically) The character plates and napkins are what all the kids want and expect. So, how could I deny all that, and plus I am suppose to be "embracing" this sort of thing. It is my word for the year after all! So as I sit here and ponder why I didn't ask the kids to bring art work or letters for Holland instead of gifts, I am going to be thankful that she has 27 friends who are coming (with gift in hand) to celebrate her and all her wonderfulness!

Tune in later for a more in depth report and probably a couple of pictures, too!
Posted by Ashley at 12:03 PM