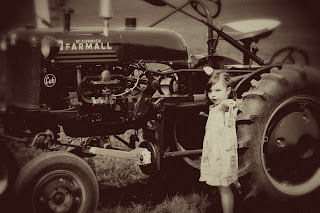 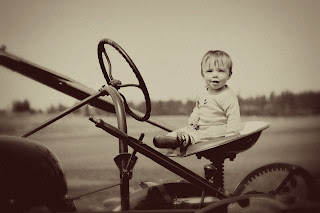 I went out to a friend's house the other day for a photo shoot, and these are a couple of shots that I ended up with. I went to photograph her and her two boys, but I snuck in a couple of shots of my girls while in the process. They live out in the country, and they have a neighbor who has a couple of antique tractors. She called him up and asked him if we could get some pictures of the kids on them, and he was just tickled to have an excuse to get them out of the garage. It was pretty neat. The shots I took of my friend's son are priceless, but I haven't asked her permission about posting any so I'll need to do that before I can show them off.

In the first picture, Holland is attempting to get up on the tractor but she forgot she had her puse with her. She turned to me and said, "here hold my purse". Then within a few seconds she wanted her purse back. She lost all interest in climbing up in the driver's seat.

That pretty much sums her up - one foot in poopy, tomboy land, and the other foot in princess, fairtale land. Too bad I didn't have one of her princess dresses on hand - now that would have been a priceless shot for sure!

Hey Ashley - I check out your blog and your phanfare daily and love it. Your blog is always so entertaining and well written. Sorry I don't always leave a comment - I feel bad since you take the time to blog, I could at least respond...watch for improvement on my part. Annette

This is just a test

Ashley,
These photos are AMAZING. When I first glanced at them, I thought they were from an antique book or something. You really are very talented. I hope you get to take those photos in the lilacs soon. What a nice tradition! ;)